So, during our Kill Zone tournament which was so much fun we had several people really get into the scheme of things and build custom models.  This week I will share photos from Erik who finally got me some good photos of his excellent orks and their custom jobs!  But first - his wonderful narrative which won him a prize in the tournament:

Warboss Grimscar Skullsmasha was anxious, and not too pleased with anything to boot.  There had been some great strides in ensuring his Waaaaggghhh! would be ready to get off this stinking rock and would be able to sweep through the humies with little trouble.  He felt his time had come and it was time to show what a proper BloodAxe was capable of, with the proper planning and cunnin'.
And yet…
There was still much to do.  And now this, this, … inconvenience.  If he could have pronounced it, let alone understood it, he would be pleased with how it described the current situation that required his attention.
As he stomped through his Command Bunka, his mood grew fouler along with the air quality.  He knew he was nearing the areas used by the Meks and Painboyz.  The atmosphere smelled of ozone, boom powder, blood and other less appealing juices.  An occasional *Whiz*, *Pop*, and wet splat punctuated the poorly lit corridors.
“Alright, mek, whatta yuz gotz ta show me?” he snarled as he entered the Worky Shops.
Fixit Biggit looked at his leader with a glance of mild annoyance.  He had been responsible for some of the boldest innovations this mob had, and he was still treated little better than a grot scrounga.
“Kommanda, we got a great new idea fer da ladz; it’ll help us against all gases and dem bloated chaos humies and everythin'…”
“Hummmpphh…”
“Yuz simply put dis baggy ting ova yer noggin, looks out dez eye holes, and (wif a little bit of luck), yuz goes about crumpin’…”
“A bag?  On yer 'Ead?”  Skullsmasha resisted the urge to exercise his name on the mek’s noggin.
“Well, dats de ‘Mark I’ vershun, so yeah.”
The silence was deafening.
“Of course,” Fixit added quickly, “we’ve already made modifikashuns; added filters, or implants, iffin da price is right…”
“And whooz got des ‘implants’?”
“Well, Snaaga’s got de Mk I vershun of implants; Ve put da' Mk 3 in some of de ladz in the lab…”
“Whooz ‘we’?”
“Oh, dem pain jockeys next door down and …”
“Mk 3?  Where’s da Mk 2?”
“Oh, over der, up on da ceiling, and a bit of ‘em is still in dos hard to reach corners.”
Skullsmasha looked at the gear on the tables.  His mind was beginning to tinker with the possibilities and cunning plans that could be carried out on less than optimum target worlds that they usually passed by.  Every BloodAxe worth his blade understood the term casualty rates.
“What we really need boss is some field testin’,” Fixit piped in.
“Field testin’?”
“Yep.  Been talkin' to da crazies in da star pen and dey found us a nice world, humies world to boot, just waitin’ fer us to try sum'fin on.”
“And how do yuz suppose we get dere?  Just take one of me kroozers and go dashin’ into humie space?”
“Naw, we launched a teleporta unit 2-3 moons ago, just in case such a situation ever came up.”
Skullsmasha blinked.  The mek had acted without authorizin’ or proper plannin’; but with cunning even he respected, and suspected.  Dis one would bear watchin’, very close watchin’.
“So, everyfin ready ta go?  Da teleporta works and all?”
“Well, it works…We sent a couple of homer squigs an' grots through it.  Da Squigs came back, all fat and happy like.  Still waitin’ on da grots though…”
“How many ‘volunteers’ do uz need?”
“Oh, no more’n 20, or less…less probably.  Dat way we can put da gear through proper field testin’ and da ladz can still get some crumpin’ in.”
“Fewer dens a proper mob…Ok, I’ve got a few ladz in mind, trouble makas de lot of dem.”
“Well, we can include Snaaga…for leadaship and all.”
“Why?  He’s one of me best ladz.”
“Well, when he came in da last time all shots up, we did slap de Mk I on, and he is one of yer best…”
“Riigghht…well den, if he goes, he goes.  Make sure ya include one uv yer own meks and a Kan fer some proper crumpin’ and you’ll not have to go yerself.”
“Well, Wrencha has the Mk 3 already…coupla burnas for scrap collectin’…Kan…Snaaga…”
“Add 2 or 3 boyz to boot and some kommando fer skulkin’ about all quiet like.”
“Right you are, Boss...”
“And Fixit?”
“Yeah Boss?”
“Tell anyone, or do anyting like dis again; you’ll find yer guts in the hard to reach corners and yer head on me Bosspole, Savvy?”
*Gulp* “Yessir.” 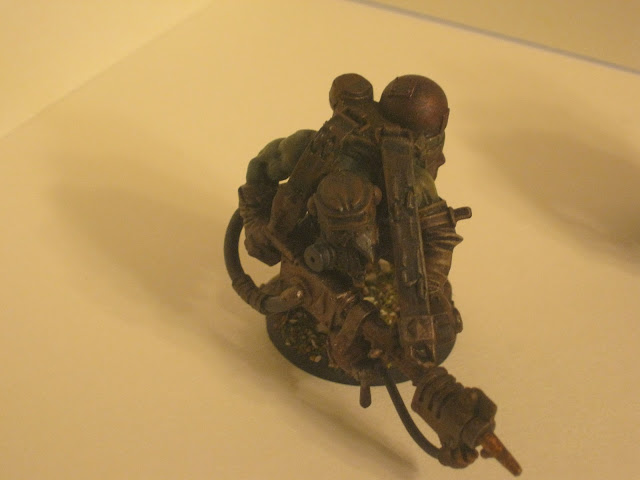 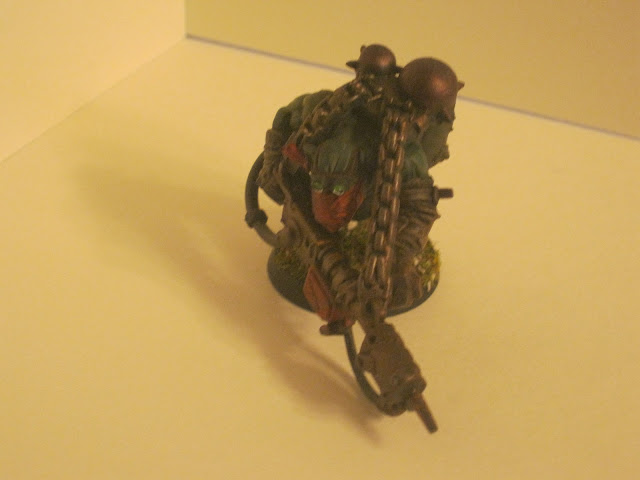 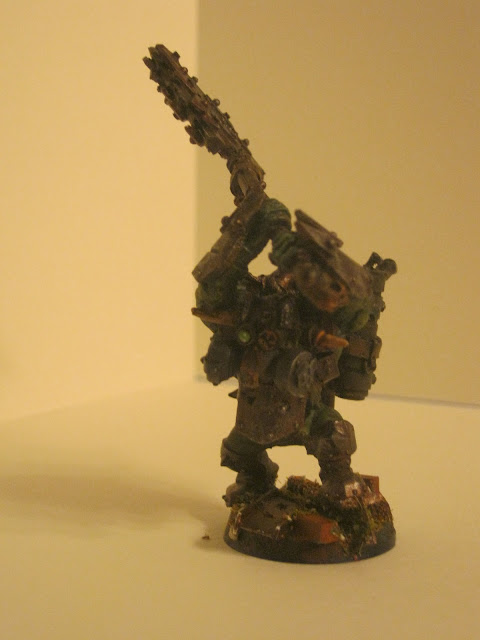 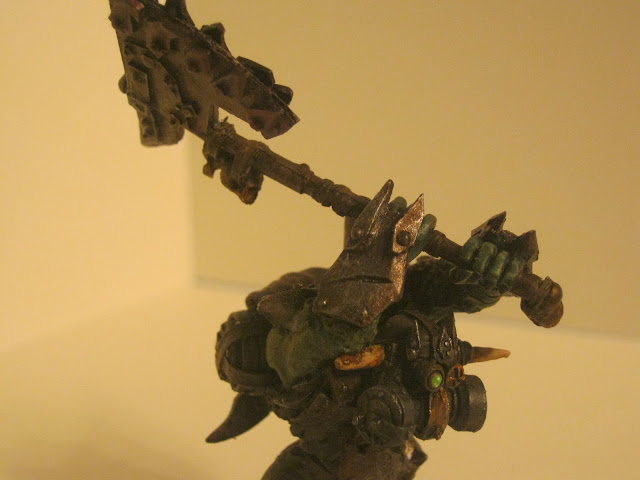 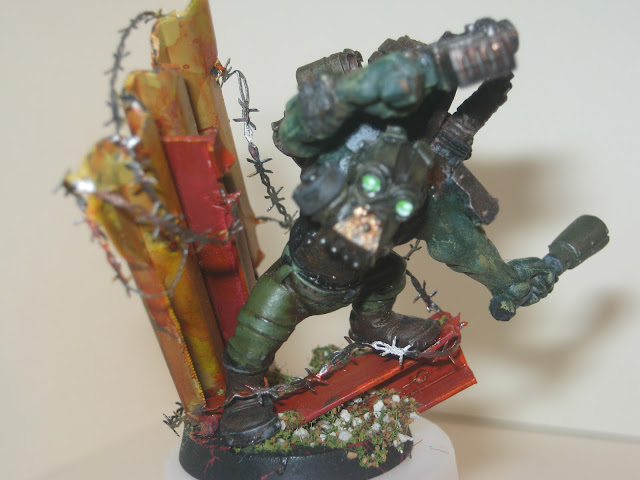 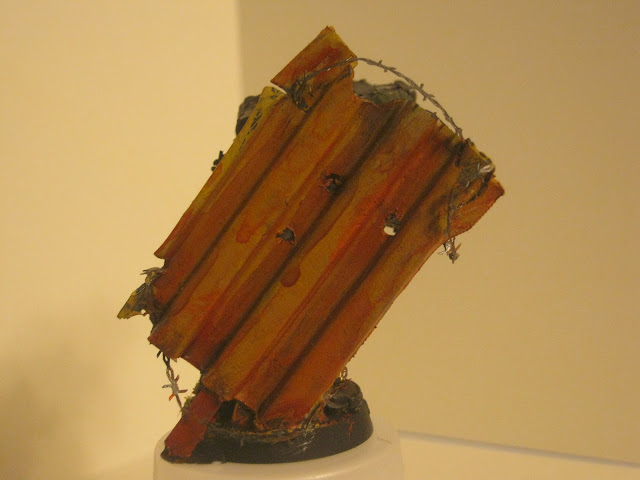 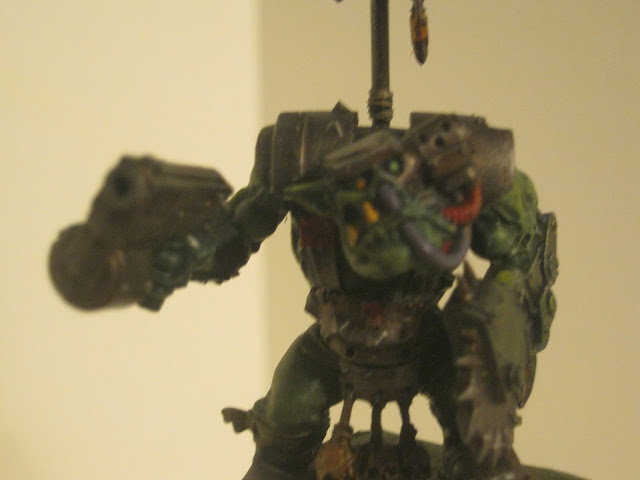 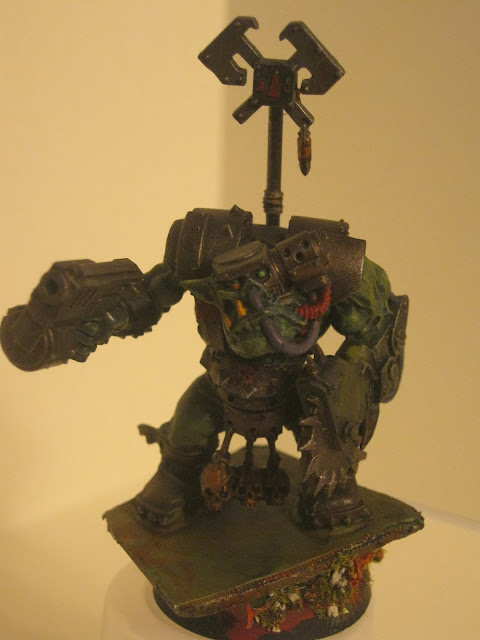 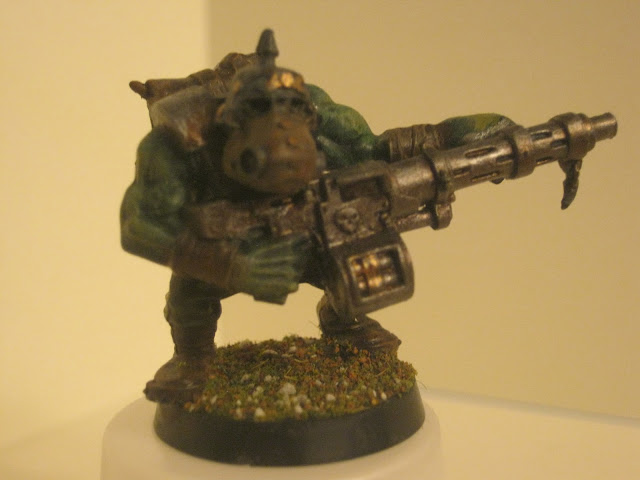 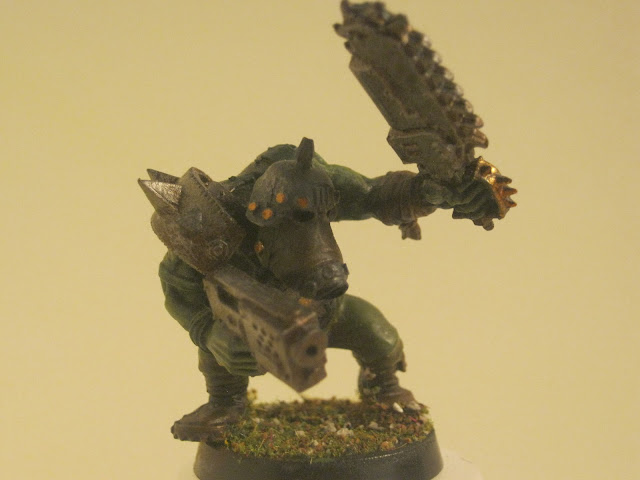 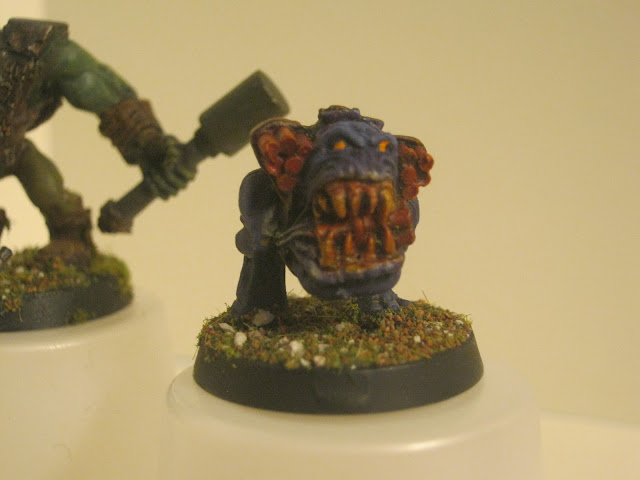 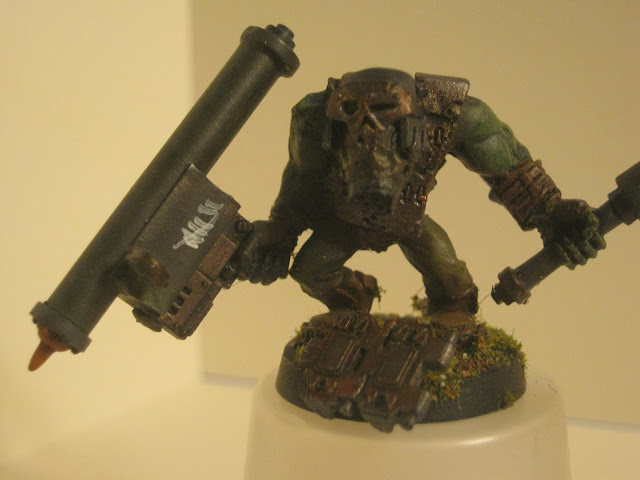 Posted by Jovian1 on The Miniatures Page at 8:18 PM