Khirab the focus of Tyranid menace!


On the very outskirts of Sector 6,
Brother Domaine headed out to meet up with his new Squad "5th Raiders" assault squad.
on a Small outpost.  Brother Fred was also stationed at the outpost with the 4th Raiders assault squad.
Still needing to prove himself before he would be able to lead his own squad.

The Warning Bells rang loud as a Tyranid force came over the top of the ridge overlooking the lone building and the statue of a long dead hero.  A squad of hormagaunts were quickly mowed down by the heavy bolters.
A second swarm of Hormagaunts hit the "4th Raiders Squad" and quickly they awere taken to the arms of the Emperor.  Brother Fred managed to "get back up" from his wounds just in time to see a Trygon burst up beside him! Brother Fred was isolated on the South side of the building with no back up other than the scout snipers.
So Brother Fred decided quickly to protect the North Side of the Building with the heavy weapon's Teams.

Brother Kasan (a former jump squad member) was now in a standard troop squad and armed with a Lascannon. Brother Kasan managed to get the kill shot on the Hive Tyrant and 2 Carnifex's.  All in a days work for the finest of the Imperium!

The Heroes generated by Gary - our good friend in New York - for the campaign and with the gracious support of his gaming friends out there!
Brother Domaine (found seriously injured on the battlefield) Special Character Death Table result: Rolled (2) 4
Brother Domaine is now out for the duration of Phase 2 until he can procure Bionics in Phase 3.

Tranquility spawns the first cooperation between Seccessionsist and Loyalists!

The Cleansing of Tranquility
Section 2- 5000pts
Raptors- (Loyalists)  Jeff
Lamenters- (Secessionists)  Justin
Imperial Guard Cultists- (Raider)
Chaos Space Marines- (Raider)
Chaos Undivided Daemons- (Raiders) Jarrod
+++ INCOMING TRANSMISSION+++
+++DECRYPTING TRANSMISSION+++
+++ *&^NSU*~##&%&+++
+ SENDER: Brother Sergeant Hanarius ,   4th Scout Recon
+ TO: Lias Issodon, Raptor's Chapter Master
+SUBJECT: Possible Contact with Chaos
++++ TRANSMISSION BEGINS ++++
Spotted heretics summoning altars and cultists while scouting out the terrain before attacking the Lamentors stronghold south of our landing.  Recommend a temporary cease fire with the Lamenters to deal with this Daemon threat.  Sergeant Hanarius out.
++++ TRANSMISSION ENDS++++
Due to Sergeant Hanarius' exceptional recon of the battlefield,the Raptors were able to co-ordinate with members of the Lamenters in properly dispatching the Chaos menace before it overtook the world.  Lias Issodon dispatched Captain Karniath, Forgefather Emillio, and Brother Sergeant Niro to the field, while the Lamenters dispatched Brother Sergeant Testiclees and  Chaplain Kane to assist.
The Lamentors Scouts looking to get the first blood charged the Cultist Leman Russ formation getting pounded into the ground.  When the dust settled two of them remained hugging the bare earth for all it's worth.  On the other side of the battlefield one of the Raptors Razorbacks made the mistake of moving to far forward to get a Defiliers Battle Cannon through the hull ripping the treads out from under it.  The Raptors and Lamenters retaliation was swift as Demolsiher Cannons and and Heavy Bolters rained fire upon the  Cultists as they were scurrying to protect their Summoning Altars. The Raptors drop pod smashed into the battlefield as Venerable Brother Jarvis unleashed a short salvo into a cultist Leman Russ tank stunning the crew inside from the shock of the las-shots pounding into the armor.  The Lamenters Scouts using the cover of the drop pod's decent charged another Cultist tank planting charges around it's main cannon blowing it sky high.
The Space Marines we a little late to stop the ritual as Warp rifts started to open up disgorging Daemons across the open sections of the battlefield and Khorne berserkers charged the Lamenters lines. The enemies Defiler changed targets and launched shot after shot into the Raptors Vindicator tossing it all around doing little in real damage, the crew laughing thinking their brothers in the remaining Razorback was playing demolition derby with the.  Meanwhile the Lamenters held their ground pouring as much lascannon shots into a Keeper of Secrets bringing it down to the ground.
Upon seeing the Lamenters line get assaulted Brother Sergeant Niro picked up the Forgefather and hurled him into the Berserkers taking four out upon hitting the battle lines.  Overhead the sounds of the Lamenters Stormraven engines could be heard as they brought in reinforcements to take down the dameonic Soul Grinder.  Brother Armenias helped by causing the mechanical aspect of the soul grinder with his assault cannon rounds blessed by their chaplains before the Lamenters brought it down.  Back on the other side Brother Jerath was not so lucky as his psycho-conditioning waived upon seeing a Soul Grinder up close, fired his Plasma Gun without paying head to the weapons heat meter. The weapon let out a high pitched whine as the plasma guns charge went into meltdown mode.  There was a brief flash of light as the charge went melting and cooking Brother Jerath ceramite armor in one go.
The success was short lived as more Warp rifts split the sky open as more Daemons was unleashed onto the world.  A lucky shot from the Raptors Predator managed to bring down a Blood Thirster before it could do much damage in its corporeal form. Not wanting to be sent back to the warp the soul grinders tried to take as much people with them before they fell successfully destroying half Raptor Squad Grey.
Just as quick as the battle had started the Lamenters cleansed the Summoning grounds with the blood of the Cultist managing to dispatch the remaining daemons back to the warp.  Knowing that battle with the Lamenters was inevitable the Raptors fled the battlefield to someday launch an assault upon the Lamenters when they were more unaware
Loyalist and Secessionist win.
Posted by Jovian1 on The Miniatures Page at 2:44 PM No comments: 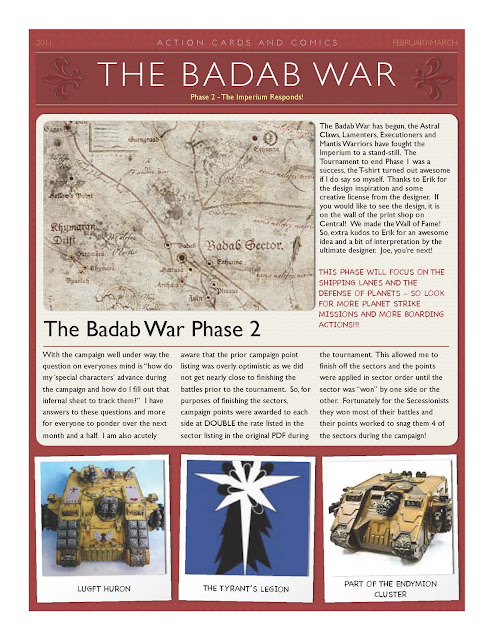 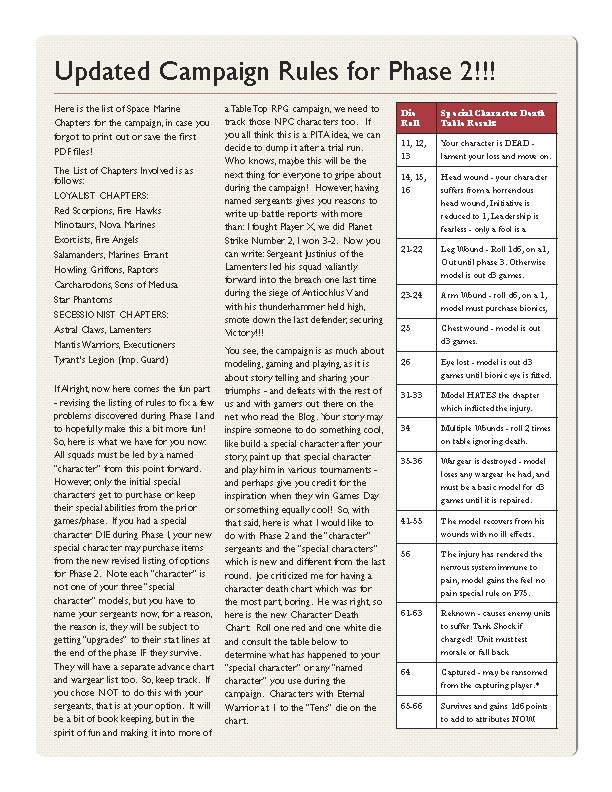 Posted by Jovian1 on The Miniatures Page at 10:53 AM No comments: 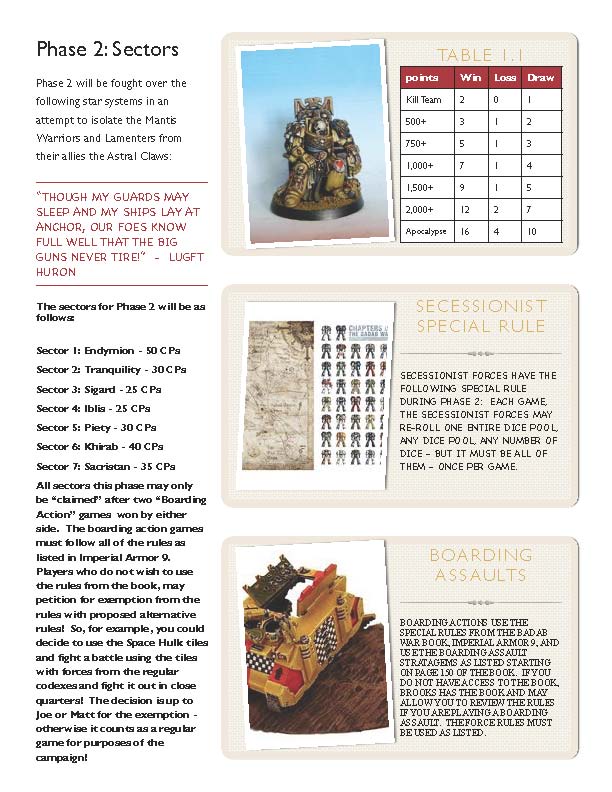 Posted by Jovian1 on The Miniatures Page at 10:52 AM No comments: 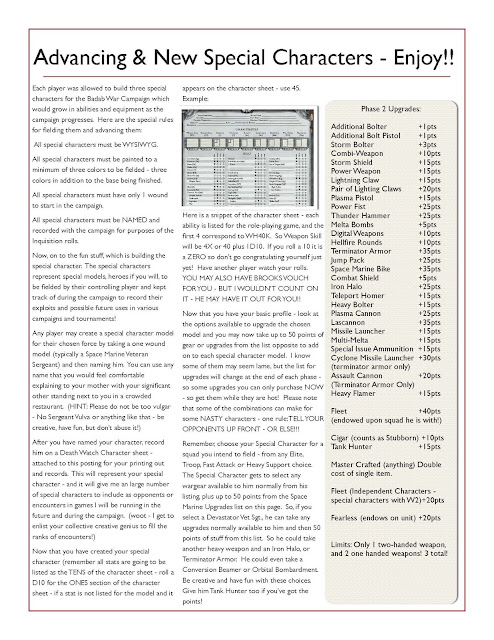 Posted by Jovian1 on The Miniatures Page at 10:51 AM No comments: 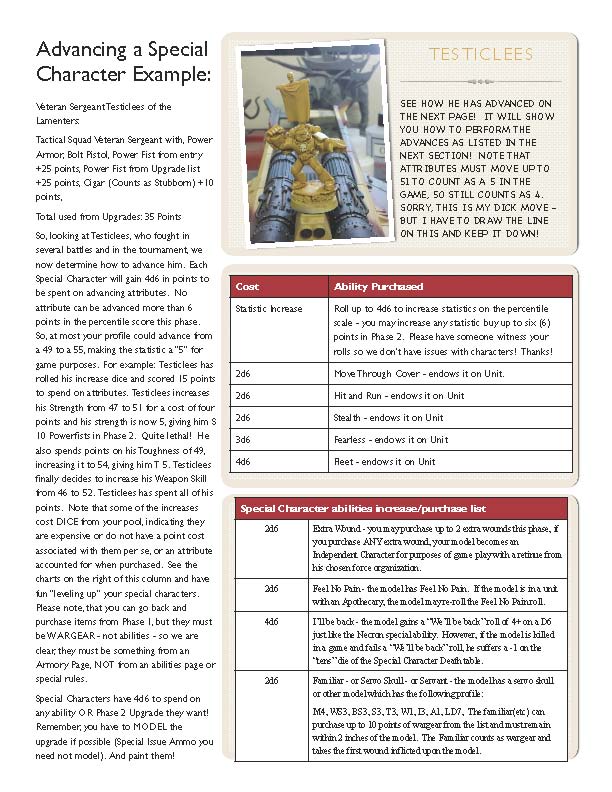 Posted by Jovian1 on The Miniatures Page at 10:50 AM No comments: 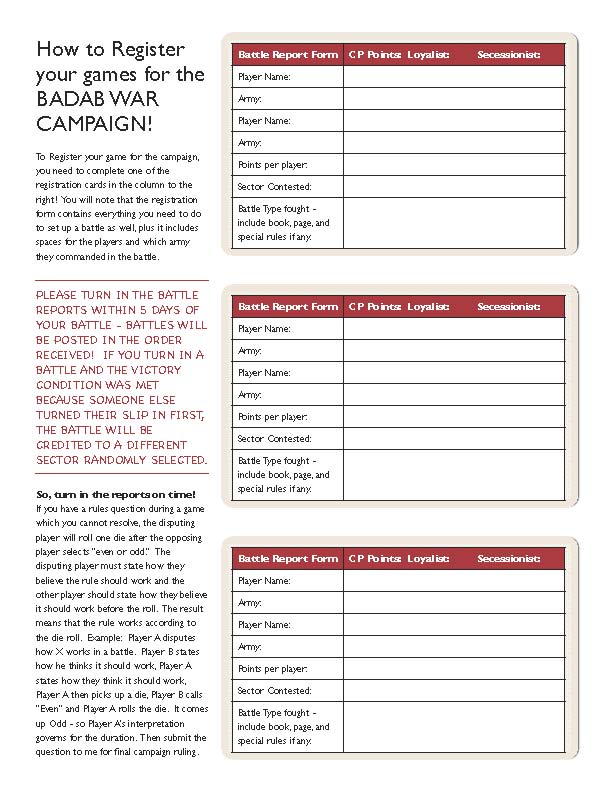 Posted by Jovian1 on The Miniatures Page at 10:37 AM No comments: 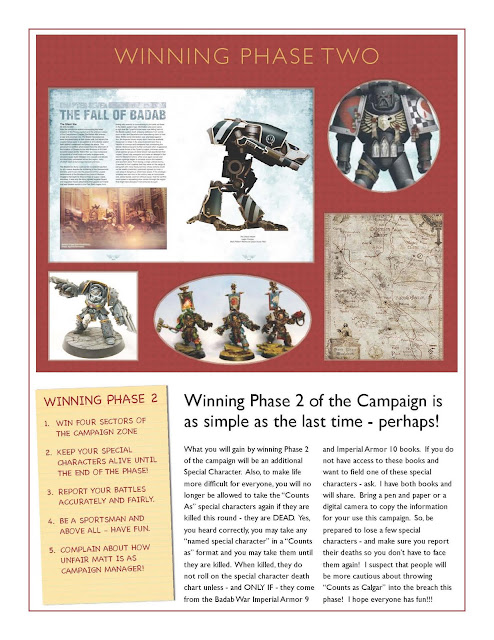 Posted by Jovian1 on The Miniatures Page at 10:36 AM No comments:

The Exorcists attempt to take control in Sector 7!

Mathew and Scott fought three battles in Sector 7 and here are the reports:

Report: The Exorcist scouting party had established 2 primary landing zones to begin dropping their heavy equipment for the siege to come and found no resistance establishing the first zone. However, as they moved across the open field to clear the second zone they encountered the Astral Claw scouts tracking their every move with sniper rifles. The battle was fierce as the Exorcists attempted to silence the pickett line and take the second landing zone, while the Astral Claw defenders following the lead of Chaplain Pwnzorus attempted to force the vanguard back off the planet for good. The Excorsist forces were too strong on the initial landing point to be pushed off, resulting in the loss of Chaplain Pwnzorus soon after he had slain the Exorcists Librarian.  The scouts defending the second landing zone were able to repel the invaders and hold their position long enough to send a report back to command. Although the Exorcists have established a point to begin landing troops, the Astral Claws would be ready...

Final result: Draw, one objective held by each force.  No campaign point award to either side.

Report: Having established a landing zone, the Exorcists chose to move against the nearby Astral Claws bastion resting on a cliffside overlooking the hilly terrain. Chaplain Pwnstarus of the Astral Claws commanded the troops there, and although the initial orbital bombardment brought a bunker down on his head, he was able to free himself from the rubble and lead the defenders as the enemy forces began teleporting and dropping onto the battlefield. Although Chaplain Pwnstarus fell when he lept into close combat with a force of Terminators that had teleported in behind his defences, the massed fire of his Sternguard Veteran Squad Teabagerus backed by a tactical and devestator squad prooved too much for the Exorcist Librarian leading his tactical squads and their Terminator support. Though losses were heavy (with the exeption of Devestator Squad Smokenemus which walked away unscathed) The Astral Claws emerged victorious, laying the Exorsists down to the last man.

3rd Battle: *750* Astral Claws attempt to move across the plains to retake the Excorcist landing zone and end the battle for Planet Urbase

Report: Captain Beatdownus moved his forces to engage the now steady flow of Exorcist forces emerging from the landing zones. The new Librarian for the Excorsists saw the approach and readied his men for the assault. Captain Beatdownus immediatly threw himself and his assult squad into the midst of the enemy leader and his terminator support and after several minutes of intense combat finally forced the enemy leader back, though he himself had to fall back as several tactical squads had rushed to their leader's support and overwhelmed him. The apothecaries on both sides had their work cut out for them, quickly mending the troops and sending them back into the frey, even both the leaders made a reapprerance for a short time. However, the Exorcists having felt the wrath of the Astral Claw Chaplains twice now were looking for Chaplain Baitus, sending him back to the apothecary every time he tried to rejoin the battle, the morale he inspired when winning soon crumbling the spirit of his forces with his repeated defeats. Though Captain Beatdownus was loath to do so, he pulled his men back to the unbroken bastion to recover their losses.


Current Status of Sector 7, Split evenly between Loyalist and Seccessionist forces. The next battles should seal the fate of the sector for one side or the other.

*This report was produced from the veiwpoint of Apothecary Couchtaterus of the Astral Claws, thus the document may seem one sided in its descriptions to future historians.*


Updated Chart of the sectors and the campaign to date:

Posted by Jovian1 on The Miniatures Page at 2:34 PM No comments:

This is the T-Shirt design for our first Tournament in our Badab War campaign - we try to do T-shirt tournaments every quarter at Action Cards and Comics, we've been lax as of last year, but are back in the trenches swinging this year.  This is the first of a series of planned shirts for tournament participants.  If anyone is interested in purchasing a shirt, I am certain we could make more to order.  The print will be on a Royal Blue shirt.  If interested post a comment or send an email!  The non-tournament participant price is $30!
Posted by Jovian1 on The Miniatures Page at 7:49 PM 4 comments:


M
Posted by Jovian1 on The Miniatures Page at 7:41 PM No comments: